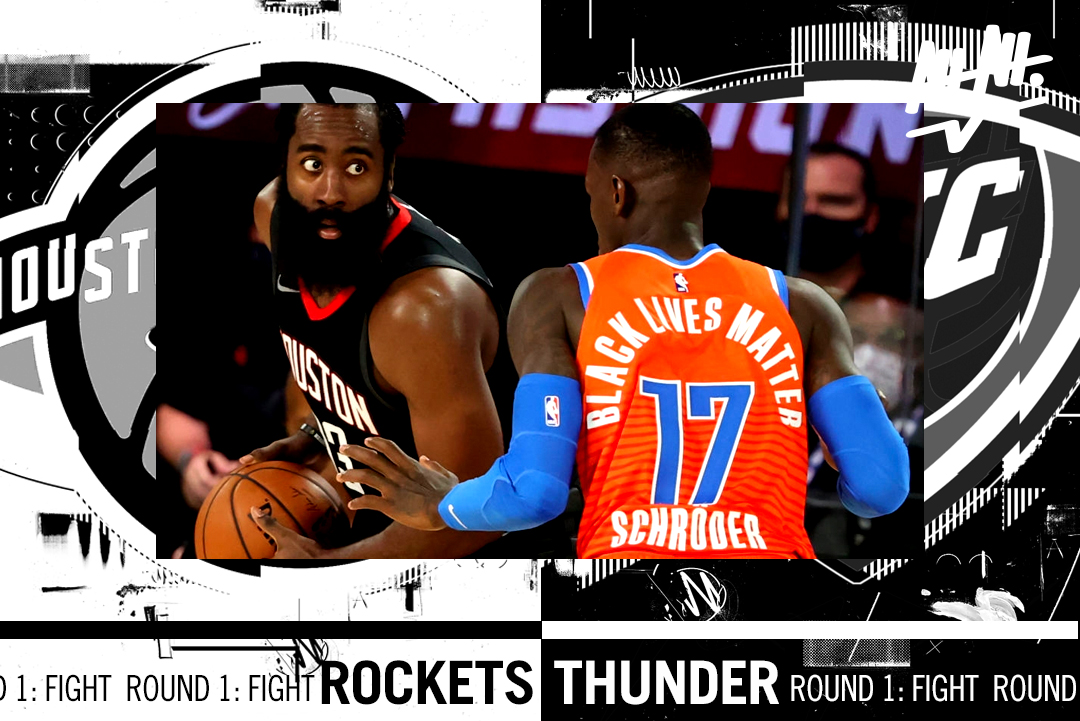 ABABGC VS. THE PLAYOFFS (ROUND 1: THUNDER VS. ROCKETS)

From the very get go, James Harden was playing with his food, man. In his first few touches, he goaded OKC to dumbly foul him beyond the perimeter, drove to the tin with ease, but then dared the old ball club: “fuck you, stop me,” and dribbled out the arc and with time melting down, coolly blasted a step-back three, just because he could.

Operation: Pester the Shit out of Chris Paul was clearly a go. My favourite being PJ Tucker with the one part headlock, one part ballroom dance annoyance. For a Professional Basketball AssholeTM, CP3 was lookin’ kinda soft serve.

Frankly, Houston is a strangely chippy team for such a small lineup. They absolutely don’t give a damn who you are. They’ll bump you. They’ll smack you, and they’re not afraid to put you on the wood.

The first quarter was garbage.

When you see that the Rockets ran the Thunder by 15, you expect to see Harden with 37 on 54%, but what you don’t expect to see is Jeff Green hero ball. 22 points on SIXTY-SEVEN SHOOTING AND A WILLLLLD 28 PLUS/MINUS.

If all of OKC’s offense is going to go through Steven Adams and Danilo Gallinari, the two guys they really can’t stop anyway, the Rockets will take it. The defense gummed up the lanes to keep the Thunder’s slash-happy, three-guard monster away from the rack, and annoyed, turning the game into a catch-and-shoot affair, which isn’t a showdown anyone is gonna take off the Rockets.

#ABABGCRoofing: Nerlens Noel turning known pip squeak Austin Rivers’ layup back like it was a game of Pong, and then sprinting down the ball to nearly save his own block from going out of bounds.

Our boy Robert Covington had a dreadful night on the offensive half, but still got thirty minutes because he—once again—played the defensive nuisance, and was key to keeping a suspect shooting Thunder squad marooned on the perimeter.

Listen, Harden’s gonna get his, but if Eric Gordon’s on his shit, very few teams are gonna beat that duo. Jeff Green adding a twenty spot, and that’s a bigger three than the Lakers have right now. It’s certainly bigger than anything OKC’s got, and this is without Westbrook on the floor. It’s still too early to call “RIP” but it’s pretty dire right now, cos that final score was kinder to the Thunder than the game itself was.

Since this is widely considered to be the Revenge of the Exes Series of these NBA Playoff quarterfinals I’m not even going to consider it having started until OKC’s the one that got (thrown) away Russell Westbrook suits up. The Harden / CP3 subplot isn’t as juicy when the Beard was clearly too busy being in his bag to care while CP3 was pouting in the corner looking for some lumbering Clint Capela / Tyson Chandler type to fuck with on the mid-range dance floor. I just hope the Thunder get their triple option point guard offense going soon because my favorite Westbrook is of the pissed off variety and there’s nothing in this world quite like having your ex-boo see you driving a brand new luxury automobile at 95 mph straight into their living room.

Mike Ellis
So, uh, even as a Rockets die hard, I thought Game One was about as pitiful as OKC’s offense could get. Wow, I was wrong. Everything was set up for the Thunder: still no revenge-ballad Westbrook, Harden having one of those deeply-off nights that pepper his play, and an OKC team that needed a moral victory after last game’s harsh dismissal. Instead of bouncing back, the Thunder fell flatter.

If I were D’antoni and had been penciling in game three for Russ’ return, I wouldn’t even. At this point it’s a much bigger fuck you for Russ to sit on the sideline and watch his new buds take out the trash that is his old team without even needing to put on court sneaks.

#RodmanCovington has yet to really live up to his role as a “three and d” demigod in this series, but his defense HAS been instrumental in the whole team holding the line. He has collapsed driving lanes, and slid down to pester Steven Adams in the post all series, and even more so in this game, when the big fella had a -26 plus-minus.

It’s been very interesting for me to watch Houston play defense with their small lineup because it should be a glaring weak spot, and in some games, it is (Brook Lopez, hello), but, Houston is probably better in the low post defensively than the perimeter (PJ Tucker, Covington, Eric Gordon, and especially James Harden are better down low). Houston wins this series because of their defense, if anything. I won’t reiterate how well Houston has fucked up the works for OKC’s three guard lineup, but they managed to shore up one of their only defensive weaknesses from game one which was Steven Adams while also forcing Gallo into really tough mid-range shots. Sure SGA went off, but, if your Houston you’ll dare the young stud to out shoot you every game.

This game was real back-and-forth, until it wasn’t (Rockets took over in the fourth), and a lot of that has to do with Sgt. Lu Dort locking up Harden who shot EIGHTEEN percent from three. The amount of skill, discipline and endurance it takes to defend eleven Harden dribblethon threes and hold him to two of them? And then five of 16 from everywhere else? And if that weren’t enough, his help defense was the best on the court, too.

Shoutout to Arizona State for both Harden and Dort.

Austin Rivers blowing past CP3 and Steven Adams for a big yammington is gonna sting when OKC reviews film tomorrow.

I don’t know what stage of “Jeff Green” I’m in, but I know that it’s called: “well, maybe Jeff Green just finally found the right fit, and it happens to be my team.” And this is after I watched him go All-Rookie Team with the Sonics, so it’s like I want this man to hurt me. Which, oh yeah, he’s not Harden, Paul, or Westbrook, but he’s got skin in the Exes Revenge drama, too.

Russ is already auditioning for a post-career coaching job. I’d be into that.

They, uh, called a foul on PJ Tucker for Chris Paul trying to dribble off his forehead.

Mike D’Antoni about Harden, “nah, nah, nah, he knows the game better than I do.” LOLOLOLOL.

Houston may only run eight deep, but 3-8 are all playing solid ball right now.

Come what may, this is the best version of the D’antoni Rockets. Period. Almost brings a tear to my eye to watch my team, this team, a D’Antoni team play real defense, man.

Jericho Vilar
Houston sitting out Russ for this whole series would be the wound most savage and deep. Also, considering that Harden only scored 21, Jeff Green continued his stellar play with 15 off the bench and we’re all talking about the Houston Rockets’ DEFENSE, I didn’t know they had an alternate bubble game site in Bizarro world. Disney messing with parallel universes doesn’t stray too far from the realm of possibility. I wonder who the Knicks are going to draft with the first pick over there.

Mike Ellis
Some draft-and-stash European player no one has ever heard of, gets shipped to some middle-of-the-road Eastern Conference team before the end of his rookie deal that comes back to beat the Knicks last game of the season keeping them from the playoffs. Alternate universe or no, they’re still the Knicks.

Mike Ellis
If only Danuel House made both his freebies. Instead of overtime where Harden fouls out and Houston immediately crumples, this might have been a 3-0 hole.

Ultimately, this is what happens when the Rockets don’t play defense, simple as that. The Thunder three-headed monster of SGA, CP3, and needing-a-three-letter acronym Dennis Schroder feasted, finally. Shai had 23, Point God had 26, and the man with the thunderbolt in his hair had 29. For good measure, OKC’s best weapon against Houston this series, Danilo Gallinari also had 20. That’s 100 of Oklahoma City’s points in only four players, which is not usually a loss for them.

For their part, Houston came roaring back to tie it late, only to let it slip in over time. Harden started slow, but ended with 38, successful when he took the defense to the basket, less so from the arc. Jeff Green continues to be the main scoring option beyond Harden, scoring 22 on 62% from everywhere, and the same from three.

There are obvious storylines going into game four, the lead being Westbrook. Will he suit up? I’m still inclined to say no. This was OKC’s best counter punch, and Houston still could have won if they handled business at the end of regulation. The advantage of Wesbrook coming back is that it moves Gordon to the second unit to work with Jeff Green and/or Westbrook.

Another storyline to watch is Lu Dort. He continues to be a pain in Harden’s ass, at least on the outside. Does Harden change his mindset, and start driving the young man into the paint, at least early to tack on fouls and limit play time?

Jeff Green. Is this for real? Is he going to remain Houston’s second scoring option? Does this loss dent his confidence?

Perhaps most importantly: should Houston never wear the H-Towns again?

You can almost picture Rockets Head Coach Mike D’Antoni wearily reaching for the hammer attached to the In Case of Emergency Break Glass container around Russell Westbrook.

Ideally, this shouldn’t even be mentioned but the Rockets’ situation was a lot more ideal a few days ago. Things were humming for the Beard and company, the defense was locked in, perennial heartbreaker Jeff Green was on an unbelievable scoring run and then things got weird. Steven Adams got hurt and benched for the overtime period in Game 3 when the Thunder’s small ball triple point guard offense really took hold and rode that momentum all the way to tying the series up with tonight’s win. With the seminal adult in the room Chris Paul calmly quarterbacking the triple PG O, it was (once again) newly minted girl dad Dennis Schroder who led OKC with 30 off the pine. Schroder’s particular return to form was the missing ingredient in the Thunder’s two losses in the series. His part and production in the three point guard look really is what made this year’s Thunder the Thunder post trading Russ. Them getting back to who they really were is what brought them back in this series.

On the other side, nothing outside of injury is ever going to really alter how the Rockets do their business. They know who they are and that’s fucking that. They shoot threes and defend, a tenet that they stayed true to in this game. Unfortunately, one aspect was a bit more prioritized than the other (the fucking guys shot 58 three pointers!). So brass taxes, with each team playing how they want to play, all that’s really left to account for are the variables, the largest of which is Russell Westbrook. His relentless barrelling into the paint and kicking out to open shooters while taking some of the responsibilities off of Harden is what’s missing from Houston’s recipe.

I’m sure it would’ve been great to have spared a recovering Westbrook from playing in this round, but, health permitting, now’s the time to stop fucking around and crack open some glass.