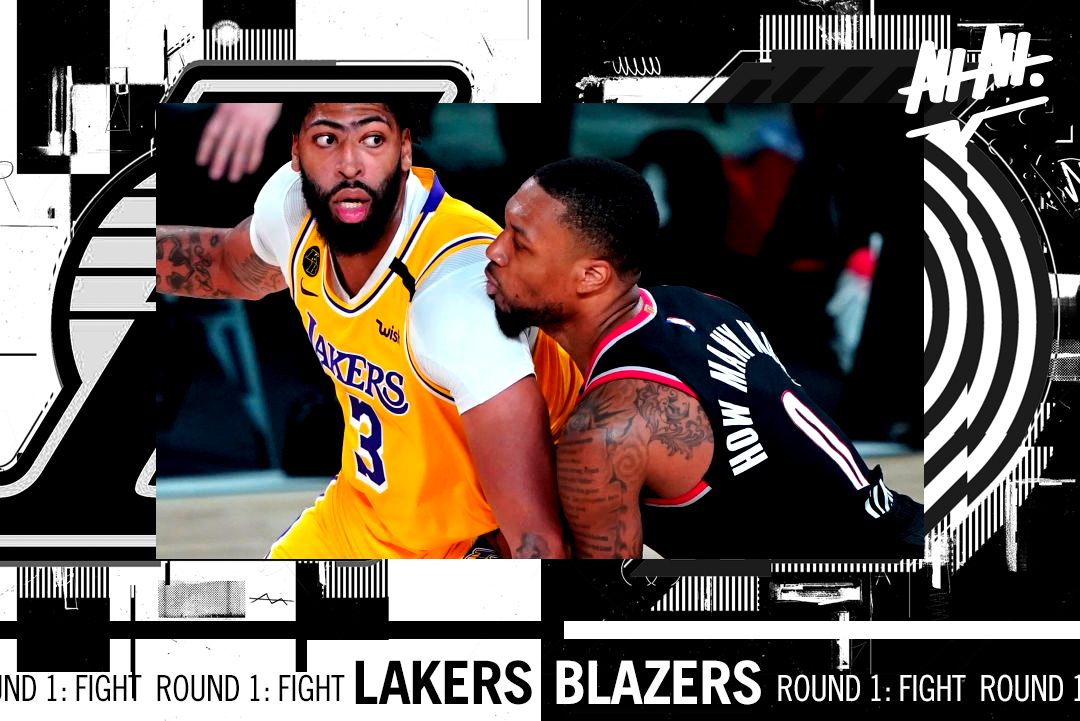 ABABGC VS. THE PLAYOFFS (ROUND 1: LAKERS VS. TRAILBLAZERS)

Mike Ellis
I want to start by talking about Skip Bayless. Throughout this whole restart and playoffs, Skip has come for Damian Lillard. He’s been on Dame’s jock like his name is Russell Westbrook or Pat Bev, and, well, we’ve seen how Dame’s responded. So, before game one, Skip does what Skip does and tweeted out “Lakers in four,” or some fuckery. You know that shit hit Lillard’s burner account immediately and he went into “fuck around and find out,” mode.

I have a theory: this is Skip’s performance art coup de grace. This is a long-con that just screams “step on me, daddy,” so he can then hold this 8-seed “upset” in the face of one Lebron Raymone James and continue playing footsie through the airwaves, hoping LBJ will top him.

And yeah, I put “upset” in quotes.

There’s no way this PDX squad is gonna be outgunned by a Lakers unit that still can’t score 100 points when LBJ gives you 23, AD puts in 28, and Kuz 14. Let’s not get it twisted, this was one of the weakest performances from Portland, too. Dame had only 34! Weak soss. Nurk, 16. Child’s play. Melo 11. Garbage time. Adopted son Gary Trent Jr., measly five. And the plus/minus was ABYSMAL when Dame walked over to his seat for all of six minutes. Chalk it up to the extra playoff game that only Portland had to play, or not, whatever. There was no better chance for the Lakers to grab hold of their destiny, and they put up 93 and fucking lost.

All week Lake fans have been saying how Portland’s defense is trash, and their big two were going to feast. Doesn’t matter how good Portland’s (underrated) defense is when your big 2.5 shoot 38% from the floor. You played yourself.

‘Bron Bron had four turnovers, half of his team’s total.

Alex Caruso and Markieff Morris are your Plus-Minus Gods.

It’s looked all Bubble season that the Lakers lost the manual on how to turn this thing into playoff mode. But hey, Laker fans, at least that other team in LA is pretty good.

I’m pretty sure Skip already has his Dame couldn’t have done it without me 6th Man of the Year campaign ready for the next available Undisputed A Block. You’re right though about this fucker’s weird kink about getting one over on LeBron. I wish he’d just write slash fiction at home like a normal human being.

Back to the actual game, however.

I, much like a lot of people, expected LeBron and the Lakers to flip the switch and make a better show of it. Granted, the King had one helluva triple double (23 pts / 17 rebs / 16 asts) but it was the one assist that he couldn’t produce that matters the most: his failure to assist in getting Avery Bradley off his couch and on a red eye flight to Orlando. I agree it’s kinda cheap for me to opine about what they don’t have, but all this time in the bubble WE ALL KNOW EXACTLY WHAT THEY HAVE and THAT’S the problem. You know what you have with KCP and Danny Green (a Klutch Sports junior intern and a streaky shooter you can sincerely only trust maybe a quarter of the time) so why not play Dion Waiters and JR Smith instead? It’s not like they could do any worst because now they have to do something different.

Like El said, these Blazers haven’t even shown them their A game yet. So unless they do something drastic, heaven help the Lakers when they do.

Mike Ellis
They may not have shown their A-game, but now we absolutely know what Portland’s  D- game (that stands for minus Dame… get it? Get it?) looks like, and let me tell you, it ain’t pretty.

I know he played 30 minutes, but that’s still roughly 10-15 less than he normally gives, and that’s the entirety of Dame Time. I have no stats to support this, but, I’m pretty sure Portland is -50 when they don’t get their Dame Time.

Jericho Vilar
We all knew it was coming. After all the discourse around their performance in the bubble leading up to Game 1 and that whole situation boiling over after the loss, the Lakers had to clap back. This time, however, it wasn’t the King who did the clapping, it was the Brow. One of my favorite subplots of this particular playoffs is all the hero ball activations. I love watching pissed off superstars taking control and bullying their opponent to submission and off all the superstars who I’ve wanted to see play angry, Anthony Davis is second only to Damian Lillard. For all of LeBron’s talk about handing the reins of the team over to Davis, there was always that question of whether he would actually do it. Understandable considering he’s been doing all the driving for his whole career, but the beauty of this particular game was that Davis wasn’t given the keys, he took them. About goddamn time, too, because not unlike LeBron, we’ve been oh so very tired of waiting.

Mike Ellis
I like that Lebron acknowledged that it’s only one game, and it is. AD went off for…just about only the second time since the restart, and he’s gonna need to continue to do that, while getting Lebron involved. A third scorer would be nice too. If there’s one thing a healthy PDX has, it’s scorers. And yes, the Lakers broke 100 which has been a struggle for them, but they still shot pretty iffy, and that century feels more like a product of Portland’s failures. The Lakers have played a good offensive game, shots just haven’t gone in. I don’t know if that’s because they’re actually a bad shooting team in the here and now, or what, but one thing they should be able to do is dump it in low or take it to the tin with AD and Lebron. I like the approach of this game where they went inside early to build up confidence instead of passing the ball around and shooting heat checks.

The Blazers are now without Big Z, and potentially a hampered Dame? It’s entirely likely that injuries once again beat Portland before LA does. If anything, I’d stay away from those red unis though. As cool as they are.

KCP heard me call him cheeks.

For about a millisecond it seemed almost doable, didn’t it?

Dame and the Blazers were riding on such an emotional hot streak, LeBron and the Lakers were meandering into the playoffs AND THEN Portland took Game 1 from LA. That was the moment, now in hindsight the briefest of moments, that I truly and sincerely believed that David was going to slay Goliath. Then the Brow took over Game 2 AND THEN the Brow and the King BOTH took over Game 3 (which we completely forgot to cover) immediately after which the Earth returned to it’s normal orbit causing Cinderella’s glass slipper to come crashing back down to it.

So now everything’s back to normal, which is exactly what the Blazers didn’t need if they were to have any sort of chance of tying up the series last night. First off the practical reasons, Dame having suffered a finger injury the previous game was already physically compromised going in from all of the in game heavy lifting he’s had to do during the seeding games, CJ McCollum was gutting through back issues and Zach Collins was done for the season. Not to mention the general level of exhaustion the whole team must’ve felt making this arduous trek up the mountain. Secondly the more esoteric reason, through either serendipity or flat out genius scheduling, Game 4 was to be played on 8/24, a date that no NBA teams usually play on since it usually falls during their off season. That date will now also forever be known as Kobe Bryant day in commemoration of the jersey numbers the legend played in during his time with the Lakers before his untimely death earlier this year. If that wasn’t enough, to mark the occasion the team would be wearing their Black Mamba uniforms to honor Kobe’s and his late daughter Gigi Bryant’s memory.

Portland wasn’t getting out of this one alive.

LeBron went absolutely berzerk in this game, building an 18 point lead after the first quarter and leading by as much as 38 goddamn points in the game. Having said in a post game interview that he felt Kobe’s presence in the building, LeBron James made it crystal clear who the vessel was that his spirit moved through. Fully engaged on defense and relentlessly dynamic on offense, a snarling LeBron even took a couple of logo distance triples just to remind the other side that whatever they can do he can do better.

I don’t think it’s weird to say that as a proper tribute to the fallen Lakers icon a blood sacrifice would be necessary. As satisfying as it must’ve been to do what they did to the Blazers after all the second guessing they’ve received and #WashedKing insults they’ve been darted with, in true Kobe fashion, no one’s happy until the last hammer blow falls this Wednesday.

previousABABGC VS. THE PLAYOFFS (ROUND 1: MAVERICKS VS. CLIPPERS)
nextABABGC: Not Postponed